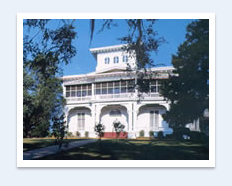 Tougaloo College is a private, coeducational, historically black four-year liberal arts, church-related, but not a church-controlled institution. It sits on 500 acres of land on West County Line Road on the northern edge of Jackson, Mississippi. In Good Biblical Style, the Amistad, the famous court case that freed Africans who were accused of mutiny after they killed a part of the captor crew of the slave ship Amistad and took over the vessel, begat the American Missionary Association. The American Missionary Association begat Tougaloo College and her five sister institutions.

In 1869, the American Missionary Association of New York purchased five hundred acres of land from John Boddie, owner of the Boddie Plantation, to establish a school for the training of young people "irrespective of religious tenets and conducted on the most liberal principles for the benefit of our citizens in general." The Mississippi State Legislature granted the institution a charter under Tougaloo University in 1871. The Normal Department was recognized as a teacher training school until 1892, at which time the College ceased to receive aid from the state. Courses for college credit were first offered in 1897, and in 1901, the first Bachelor of Arts degree was awarded to Traverse S. Crawford. In 1916, Tougaloo University's name was changed to Tougaloo College.

Six years after Tougaloo College's founding, the Home Missionary Society of the Disciples of Christ obtained a charter from the Mississippi State Legislature to establish Southern Christian Institute (SCI) in Edwards, Mississippi. Determining later that Tougaloo College and SCI had similar missions and goals, the supporting churches merged the two institutions in 1954 and named the new institution Tougaloo Southern Christian College. Combining the resources of the two supporting bodies, the new institution renewed its commitment to educational advancement and the improvement of race relations in Mississippi. The alumni bodies united to become the National Alumni Association of Tougaloo Southern Christian College. In 1962, by a vote of the Board of Trustees and the supporting bodies' agreement, the name was changed again to Tougaloo College.

Tougaloo College has gained national respect for its high academic standards and level of social responsibility. The College reached the ultimate demonstration of its social commitment during the turbulent years of the 1960s. During that period, Tougaloo College was at the forefront of the Civil Rights Movement in Mississippi, serving as a safe haven for those who fought for freedom, equality, justice, and the sanctuary within which the strategies were devised and implemented to end segregation and improve race relations. Tougaloo College's leadership, courage in opening its campus to the Freedom Riders and other Civil Rights workers and leaders, and its bravery in supporting a movement — helped change the state's economic, political and social fabric of Mississippi and the nation.

Aside from its social commitment, Tougaloo College has continued to strive to create an environment of academic excellence and a campus of engaged learners. The administration and faculty continue to challenge students to be prepared to take advantage of opportunities available in a global economy and to become leaders who will effect change. The faculty has grown in quality and size, diversity has been enhanced, and the physical landscape and campus infrastructure is evolving. New curricula have been added. Partnerships and networking relationships have been established with many institutions such as Brown University, Boston College, Tufts Medical and Dental Schools, the University of Mississippi Medical Center, New York University, and other international programs.

Tougaloo College has moved forward on many different fronts. Its graduates are distinguished and engaged in meaningful work throughout the world. As the College navigates through the twenty-first century, student success remains our highest aim – ensuring that they are prepared to meet the global challenges of a changing world.

The founders continue to light the way as each who has gone before has cut this road to last. In 2019, the College welcomed its fourteenth president and second female to the distinguished list of leaders who have served.