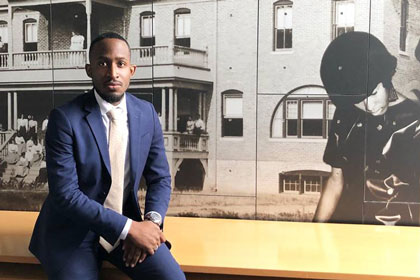 1. What is your current professional role or title?

Executive Confidential / COS at the National Education Association.

2. What did your career path look like after graduating from Tougaloo College to now?

After graduating from Tougaloo in 2014, I knew for certain I would end up in Democratic Politics on the national level in Washington, D.C. A week after graduating from Tougaloo, I began working at the Democratic National Committee (DNC) within the Office of Community Engagement. In 2015, I left the DNC to help build coalitions between the White House Office of Environmental Quality and Historically Black Colleges and Universities. In June of 2016, I was asked to become the Associate Director of Brazile & Associates, LLC., a strategic communications consulting firm here in Washington, D.C., founded by Donna Brazile (Former Interim-Chairwoman of the Democratic National Committee). In this role, I not only ran the day-to-day operations of the firm, but I also managed interns and consultants. After leaving Brazile & Associates in the fall of 2017, I transitioned into my current role at the National Education Association (NEA). In this role, I am learning not only about education on the national, state and local levels but also to use my influence to raise awareness and funding for causes that are important to the greater society. The NEA is the nation’s largest labor union, with over 3 million members.

3. How did Tougaloo College prepare you for life?

The College prepared me to become a productive citizen, in a global society. Through internship opportunities both locally and nationally, I was able to gain access to tables that I would not have otherwise had access to. Because of my work at Tougaloo and the Tougaloo brand, I am on a continued upward trajectory in the areas of higher education and public policy.

4. How would you describe your time spent at Tougaloo College?

I would describe my time at Tougaloo as memorable and transformative. I was not only able to earn a degree but also build a life-long relationship with both my peers and alumni of the college. While at Tougaloo, I also served in many leadership capacities; SGA (Senior Class President) Pre-Alumni Council (Student Advisor, Vice-President, and Special Assistant to the President of the Tougaloo College Concert Choir (President and Section Leader), Yearbook Editor and Chief, and TAMS (President and President Emeritus)

5. Why did you choose to attend Tougaloo College?

I chose to attend Tougaloo College due to its strong academic standing and rich history. Since its inception, the College continues to be a voice of hope and moral compass for the state of Mississippi and the nation.