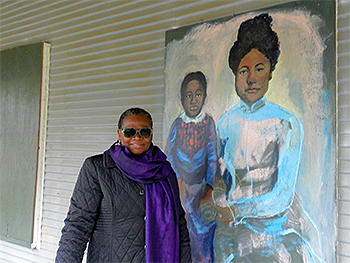 Mary Green Scott and her daughter, Virginia Ford, were freed slaves whose families owned 136 and 138 E. Cohea Street in Jackson, MS in the Farish Street Historic District. Their homes were among the first built by African Americans on the street between 1891 and 1892. Ford worked as a midwife within the community.

“Midwives helped women during labor and they helped nurture the children after birth,” said Carroll, who is from Jackson, MS. Pointing to his mural, he said, “This is one of the midwives who lived here. I chose this painting because, to me, she was a strong woman. She persevered,” said Carroll. Although he is not yet done with the mural, he is excited to complete the painting because he views it as a way to tell the story about midwifery and the many ways Cohea Street midwives impacted the community. 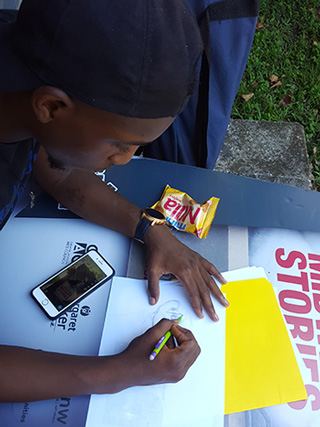 “Most of the stories that we hear now are what you see, which is a lot of abandonment and crack houses. But that’s not true of the [Farish Street Historic] District. It wasn’t like that. It would be a tragedy if this was torn down,” said Amy Lancaster, who lives on an adjoining street near the properties being revitalized.

Although there has been a lot of abandonment in the Farish Street Historic District, Professor Maberry said she hopes this project will interest others within the community to learn about the community’s history and work to preserve the story of impact and strength. Because of the rich history surrounding the Scott Ford houses, Maberry said she was excited to present this opportunity to her art students.

“The Scott-Ford Project is about telling and sharing a story and the victories and successes of being people who wanted to do something or address the issues of that time. So when the directors of the Scott-Ford project contacted me about having our students involved in this important initiative, I eagerly jumped on board,” said Maberry, who believes it is important to make the houses look presentable until they may be fully restored. 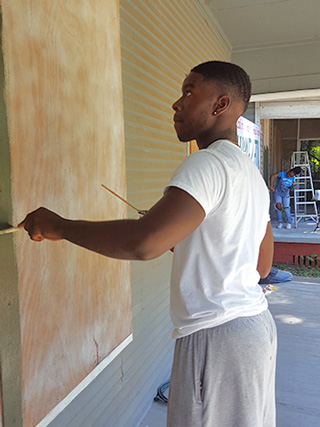 Sophomore mathematics major Tizon Matthews said while attending the Cohea Street Community Festival he learned about the midwives and what they were able to offer to this community. As a Minnesota native, this history means a lot to Matthews because Black history is not often taught where he’s from.

“It is a pleasure being able to carry on this family’s legacy through me and the paintings. Not a lot of people know the history about the midwifery, so I feel it’s important,” said Matthews.

The students began their quest to restore the beauty to the two homes by conducting research about midwifery, as well as the families who owned the houses. The project, which will take about a year to complete, will count as college community service credit for the students. 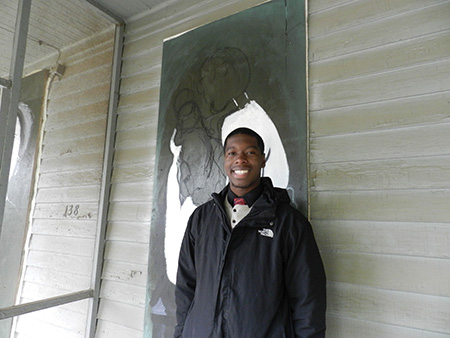 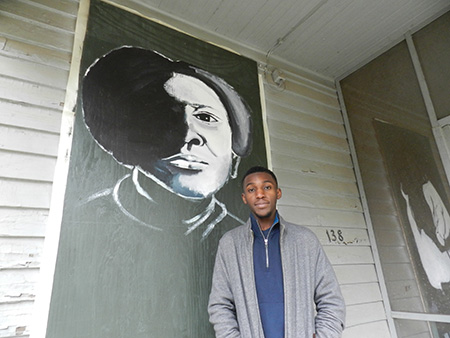